Things to learn from The Founder 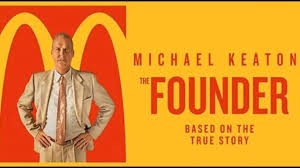 Many have written about this movie and I would not like to repeat what they have written. The have send a message to all businesses what they should pick out of this great movie. We all have things to learn from The Founder.

The Founder is a great movie about the story of Ray Kroc and two Brothers Dick and Mac Mc Donalds. I want us to learn what we can take from this story as Network Marketers.

These brothers have decided to think out of the box. There were many restaurants and they decided that they will not repeat what everyone has done. Every restaurant cooked and served good food but there was a gap that only these two brothers could fill up. The customers needed fast service and correct orders.

They went on to study Henry Fords manufacturing system that was efficient in production while it did not lose the quality and they converted this into a restaurant system.

The lesson for us as networkers: we need to learn from other business models outside the Network Marketing Industry; those which work lets incorporate them in our businesses.

I have a network marketer for you who thought out of the box and has broken more traditional myths of our industry than you can ever imagine. Just like these brothers I believe that Kim Klaver is our mentor to emulate.

This character is represented in the movie by Michael Keaton. This man sold from the age of 20 up until the age of 51 and he only impacted the business world at the age of 52 when he partnered with the Brothers.

Lesson for networkers: Even if you have been in Network Marketing for 30 years like Ray your breakthrough is still patiently waiting for you. You are never too old to make it. This is one of the main things to learn from The Founder.

Ray traveled halfway through the country to meet the McDonalds brothers and he was just an average salesman selling ice cream products that were not making it in the market.

Lesson tor networkers: Be curious and adventurous; never limit yourself to your resources. My upline Olivier Agnin took a trip to Manila Philippines for a conference when he had little resources. He took all his commission to go to a 10th Anniversary of our company Alliance In Motion.

I have not bothered to go through all we need to learn from this franchisor as networkers. You could count many things from persistence, curiosity, right team members, etc.

I have earlier encouraged that as leaders in this industry we need to be like the MacDonald brothers and learn from.other Industries. I have therefore chosen the Franchise industry for us to learn one single lesson namely: Franchisors do not sell Franchise to Franchisees just to set them for failure. They do not get excited over a closed deal but they get excited when franchisees obey all the Franchise Rules.

Many at times we rush to recruit distributors just to earn joining commission. They do not care whether these people will run the business well.

What did Ray do?

Ray sold the franchise to a number of his rich friends. They thought he will be happy to have made commission and they started doing their own things in the franchises across the country. They lowered rhe standards and sold things which are not part of the franchise. They were mistaken.

Ray stripped them off the franchise rights and he went instead to middle class hard working and disciplined people. He built a team that brought the Franchise to the World map.

Lessons for the Networkers: We need to build teams that will sell. Not investors that will just buy into the business and lower standards.

What did AIM Global do?

We have long been in establishments that reward only recruiting and use recruiting as a strategy of moving stock. Not with AIM Global.

AIM Global has 7 streams of income, five of these reward selling the product.

I encourage you to go and watch The Founder which is now on Netflix. Ask yourself this question: If AIM Global was a Franchise and I being Ray Croc taking this Franchise to prospective Franchisees the distributors, what would I do? Indeed there are plenty things to learn from The Founder.

I will welcome your comments